If you have ever seen pictures of Buenos Aires, then you have probably seen the Obelisk, or “obelisco” (Spanish). An obelisk is a stone pillar, typically having a square or rectangular cross section and a pyramidal top, set up as a monument or landmark (the Washington Monument is an example of an obelisk in the States). The Obelisco de Buenos Aires (Obelisk of Buenos Aires) is a national historic monument and icon of Buenos Aires. It was built to commemorate the fourth centenary of the first foundation of the city and is located in the Plaza de la República, in the intersection of avenues Corrientes and 9 de Julio.

In order to enrich the surroundings of the iconic monument, the government of the city started a project which created a zone full of LED signs. Since the Obelisk of the city is always associated with the night and entertainment of Buenos Aires, this project creates a zone similar to Times Square in New York and Piccadilly Circus in London.

It is a beautiful monument in the city. It is also seen in the picture of Buenos Aires on our homepage. Here are a few more pictures of el Obelisco de Buenos Aires… 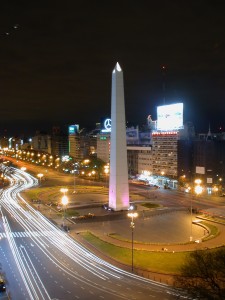 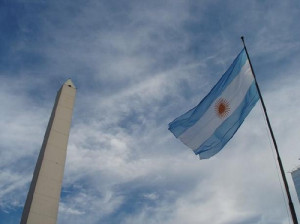 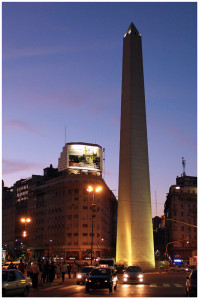